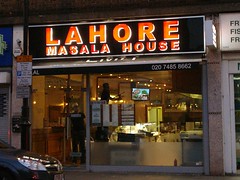 The Lahore Masala House was the second offshoot of the Lahore Kebab House in Whitechapel. According to Google Street View, it closed down some time between May 2012 and June 2014.

Opened on 18 November 2011, the Lahore Masala House is the second offshoot of the Lahore Kebab House in Whitechapel. It shares the same no-nonsense approach — plain solid wooden tables, plain cutlery and crockery, prices mostly whole pounds or £n.50, and no licence but no corkage on what you bring. However, unlike the mothership the Masala house is much smaller, and has a different layout, possibly as a consequence of being directly on a main road, instead of a side street. The front 5 metres of the premises is a take away bar, with a second plate glass wall dividing this from the seating area. This makes a very effective "porch", insulating the diners from the sound and cold of Kentish Town Road.

The restaurant only seats 36, but early on a Saturday evening in January two months after opening, was less than a third full. There are two flat screen TVs on diagonally opposite sides of the restaurant, which makes them very hard to avoid if moving pictures aren't your thing. On the night in question these were showing the cricket highlights with the sound on low. Sound wise this wasn't distracting at all, and with only one visit it's not clear whether this is the norm or the exception.

With two staff members out front and two in the restaurant area service was attentive and very fast. The delivery of food was very fast without being hurried. We could have quite easily eaten and departed within an hour without feeling rushed. It's not clear if this will slow down as trade picks up, or whether it's a commercial side effect of an unlicensed restaurant having no incentive to keep people sitting around to buy more alcohol. Their Mango Lassi was quite sweet (£2.50 for 250ml), fizzy drinks are cans brought from the bar are the front. For beer, a bottle opener was provided immediately without question, and wine glasses for another group which had brought wine. If you don't remember to bring any or run out, a branch of Co-operative food is diagonally opposite, and Oddbins about 150m north.

As an offshoot of the Lahore Kebab House, we were expecting the food to be very good, which may have clouded our judgement. The menu is simple, small and terse - single columns on 4 sides of A4. You're expected to know your stuff - about half the items are names only, with no description. There are 4 Weekend Specials on the menu - on the day a couple were unavailable and another extra dish was a substitute.

Papadoms were very fresh and crip, and of the dressings, the yoghurt was slightly bitter or spicy (we weren't quite sure), which was an interesting surprse. A starter of Paneer Tikka (£3.50) proved interesting and tasty. A main course of Karahi Bhuna Gosht was delicious and tender (£7.50), and Karahi Aloo Saag an interesting and deep green (£5). Lamb Biryani (£7.50) was served all on one plate, in contrast to the usual style of bringing out separate dishes. I assume that they adopt this approach to avoid clutter on the tables. Karahi butter chicken (£7.00) proved a disappointment - the meat was beautifully tender but the sauce was bland. This may have been a misunderstanding because we'd checked when ordering that it was mild, but in asking we weren't requesting that it be made milder still.

The toilets are at the back of the restaurant, without steps. Stickers indicate that they accept Mastercard, Visa, Maestro and Solo - we paid cash, £60 for 4. The take away menu states that they deliver free within 3 miles, minimum order £20.

Overall, interesting and not your typical "Indian" - functional rather than atmospheric. Not love at first sight, but I'd like to visit again to get a better impression, and try out more of the menu.