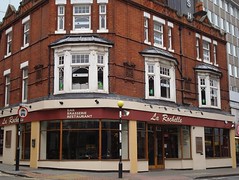 La Rochelle was a French restaurant on the High Street in Croydon. It opened in late 2012 but had closed again by May 2013. As of May 2013 there are signs up in the windows photo indicating that a bar called R&R's Lounge Bar will be opening there soon.

The information below is retained for people who want to know what it was like as La Rochelle.

French restaurant on the High Street in Croydon.

It opened some time around the end of October/start of November 2012 in premises previously occupied by Bar Red Square. According to the Croydon Advertiser, the owner has previously run two other French restaurants in Croydon (Le Bien Manger and Jardin de Provence).

It's a fairly open-feeling place, with tables not too close together. A couple of pillars break up the space, and a bar stretches along one wall. Tables are dark wood effect, and free of tablecloths. Napkins are paper, but thick and good quality ones.

Kake and Ewan visited on a Monday lunchtime in November 2012. There were a few other people in when we arrived around 1:30pm, but plenty of spare tables. Music was playing quietly. We were greeted promptly on entry and given a choice of where to sit.

Bread, butter, and olives were placed on the table as we sat down (and didn't appear on the bill); they were fine without being anything special. Tap water came in a glass with ice and lemon, but wasn't replenished.

Kake's mackerel with Dijon mustard and white wine sauce (£8.45 at lunchtime) photo was pretty good; two generous fillets in a creamy but not cloying sauce. This came with half a dozen vegetables: snow peas, aubergine, red pepper, broccoli, cauliflower, and potatoes — not a large amount of any of them, but just the right quantity overall, and they were cooked in various ways too, rather than just being plainly boiled. It's a shame there were a few seeds left on the red pepper; this wasn't a big problem, but it would have been nice not to see evidence of sloppiness in the kitchen.

Ewan's supreme of chicken with mushroom sauce (£8.45 at lunchtime) photo was perfectly decent, with some excellent mushrooms. This came with the same vegetables.

Service was friendly if a little muddled: the pre-set wine glasses were not cleared from our table even after we'd ordered other drinks, and they brought us another party's food at one point. No service charge was added to the bill.

Accessibility: No steps to get in (haven't checked the toilets yet).