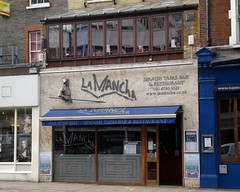 Now closed; was a tapas restaurant on the High Street in Putney.

As of June 2013 its website states that the Putney restaurant has closed and the management intend to open a new restaurant in Chiswick at some point.

Tapas restaurant on the High Street in Putney.

bob, Martin, and Phil visited on a Thursday evening in August 2009. There were quite a few people in, but there were several free tables.

We had 10 tapas dishes and some bread between us, and this was plenty. All the dishes with distinct items came in multiples of three, which was handy. As one expects with tapas, the dishes came when they were ready, rather than all at once.

The bread was okay (95p per person, with more brought at no extra cost). Jamon Serrano (£6.50) was tasty. Costilla de Cordero (grilled lamb cutlets, £8.55) were moist and tasty. Beef and chorizo meatballs (£6) were fine. Patatas bravas (£4) were nothing special; bob felt they could have been cooked slightly crisper and the sauce could have been hotter. Chipirones fritos (fried baby squid, £6.50) were pretty good; cooked just about perfect. Cannelloni de berenjenas (£6) were some very tasty aubergine slices rolled around some goats cheese. Chorizo rosario (£5.50) was a very good example of chorizo in red wine. Morcilla de Burgos (black pudding, £5.50) was quite tasty. Higado de ternera (calves' livers, £7) were supposedly very nice if you like that sort of thing (bob doesn't really like liver). Finally, bacalao y berenjenas (cod with aubergine, £8) was okay.

We also had a bottle of the house red rioja (£16.30) which was pretty good. Glases of tap water were provided without a fuss.