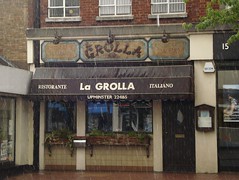 It has a kind of old-fashioned Italian-restaurant ambience, with a low exposed-beam ceiling, carved panels on the walls showing grapes on the vine, a dark brown tiled floor, mustard-yellow tablecloths, and white linen napkins. Two or three tables at the front by the window get a decent amount of natural light during the day, but otherwise the lighting is low, provided by smoked-glass lantern-style lights mounted on the walls.

Kake visited late on a Monday lunchtime in June 2009. The place was fairly empty, with only four other customers in during my entire visit. Music was playing; piano/double bass jazz, and something Glenn Miller-ish.

I was offered bread and butter; I accepted, but it was quite unexciting, comprising a few thick slices of indifferent baguette accompanied by butter in packets straight from the fridge. I was also brought some crudites and dip. The crudites (red pepper, celery, carrot, cucumber) initially looked a bit tired but were actually quite fresh and flavourful. The dip appeared to be cocktail/Marie Rose sauce.

I decided to skip starters and go straight to the main event. My first choice, salmone alla zafferano (salmon in a dill and saffron cream sauce, £13.50) had run out, but they offered me john dory as a substitute. Instead, I decided to try the gamberi alla grolla (king prawns in a spicy tomato sauce, £14.50). Sides are ordered separately, so I asked for some spinach (£2.50) as well. They offered me a choice of garlic or plain spinach, and I went for the latter.

The prawns (four of them) were a good size, and decently cooked. The spicy tomato sauce wasn't overly spicy, just a little chilli tingle. It had a good flavour, though. The spinach was cooked very plainly, and flavoured with just a little olive oil, but it was competently done and not gritty at all. I really should have had the garlic option.

Overall, I thought my meal was nice enough, but rather expensive for what it was; my final bill was £20.50 before service. It wasn't made clear whether the bread and crudites would be charged for or not; in the event, the bill included a charge of £3.50 for "BB". This is a little poor; the bread certainly wasn't worth that amount of money on its own, and if they were going to charge me for the crudites then they should have asked me if I wanted them.

Accessibility: Step-free to get in, and everything including the toilets is on the same level once you're in.