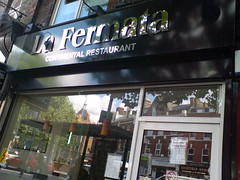 La Fermata was an Italian trattoria on Tower Bridge Road in Bermondsey; it has now closed. As of March 2014, the premises are occupied by a Lebanese restaurant called Jad Grill photo.

It opened in mid-2008, but closed less than a year later. Refurbishment work was spotted going on inside in October 2010, and in July 2011, a comment on the London SE1 forums stated that it had reopened, still under the name of La Fermata, and secretlondon confirmed this in person in September 2011. We don't know if it's the same people running it.

Note: We haven't been in since it re-opened, so the comments below may be out of date.

secretlondon visited for lunch in September 2008. There was a lunch-specific menu with three set English breakfasts, sandwiches, salads, burgers, and a pasta daily special. I had the daily pasta special which was a choice of pasta with clams, pasta in a tomato sauce, or pasta with vegetables. I chose the vegetable pasta (£5) photo and negotiated to have a latte photo with the meal rather than the included can of drink.

The menu outside was the breakfast/lunch one. I picked up a flyer for the evening photo which had things like steak. They put the evening one in the window during the evenings.

secretlondon returned in October 2008 to try one of their English breakfasts. It was good photo and came with toast photo and either tea or decent coffee photo.

As of these 2008 visits, they were unlicensed but were happy for you to bring your own, for which corkage would be charged. There was one table outside (on the front pavement) which you could smoke at. Apparently you could book out the whole place if you had a large party.

Accessibility: One small step to enter. Toilets not checked.