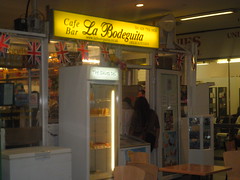 La Bodeguita Deli was a small Latin American delicatessen/cafe on the top floor of the Elephant and Castle Shopping Centre, associated with the Colombian restaurant of the same name elsewhere in the Centre. Both deli and restaurant were forced to close in September 2020 due to the impending demolition of the centre, but the restaurant has since reopened in a new location in the nearby Castle Square development.

Small delicatessen/cafe on the top floor of Elephant and Castle Shopping Centre. It is connected to the Colombian restaurant of the same name elsewhere in the Centre.

Although it calls itself a deli this is really a cafe. It has a partitioned off seating area in the shopping centre. It sells tea and coffee and Colombian food, included home-made Colombian cheese.

secretlondon visited in September 2012. I had a Cafe American with milk (an Americano, in other words) and a sweetcorn fritter with cheese on top (photo). Together it came to £4.30. There was background music.