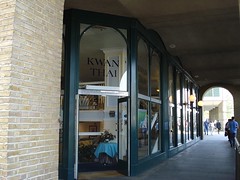 Kwan Thai was a Thai restaurant in Hays Galleria near London Bridge. It closed in early 2009, but is expected to relocate somewhere local; as of September 2009 we have no news as of where.

As of late 2009, the site is occupied by a branch of Cote Restaurants; see meemalee's review.

The information below is retained for people who want to know what it used to be like as Kwan Thai.

Good Thai food, and a fantastic view over the Thames (towards the Gherkin), near London Bridge.

They have outside tables right by the river which are lovely in the summer - worth asking for these when you book. Inside it is modern and not too crowded, with high ceilings and good big windows so you still get the view.

They do lots of vegetarian options, but be warned: they're on a separate menu which you have to ask for. As of April 2008, the vegetarian set menu is reasonable value at £18 a head for three courses and tea/coffee - the third course is fruit, which exactly hits the spot after the largely-fried starters and enormous plates of rice, red curry, beancurd, etc. Decent wine list, as well.

The staff are friendly and the right level of attentive.