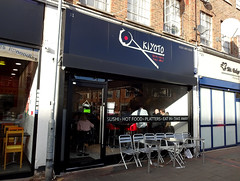 It's very casual in style, with bright white walls and floor, and an open fridge at one end holding beer and soft drinks. A sushi bar with a dozen stools runs along one wall, and six small square black formica-topped tables stand opposite, with two red plastic bucket-style stools at each. Paper napkins sit in metal dispensers on the tables.

Kake visited on a Thursday early evening in November 2017. There were already three customers in when I arrived a little after 5pm, and a few more turned up while I was there. Pop music was playing, not too loud.

The rice in the sushi was well seasoned without being overseasoned, and served still warm, which is usually a good sign. Unfortunately, it was also a bit stodgy, as if it hadn't been washed enough, and there was far too much of it, making all the sushi pieces too big to eat in one bite. This was a real shame, since the fish itself was good quality, and cut well and generously with no chewy connective tissue.

Service was fine, though some of the staff were clearly more experienced than others. Tap water arrived in a chilled swingtop bottle which was left on the table. No service charge was added to the bill.

Kake's verdict: I'd give them another chance if I was in the area, but I'd ask explicitly for much less rice in the sushi.

Accessibility: A step to get in. All the interior seating is on high or highish stools.