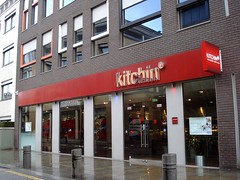 All you can eat buffet restaurant in King's Cross. It has a mixture of food — mainly Indian and Chinese but with some Italian and Thai.

secretlondon visited with some colleagues in March 2012. I mainly had the Indian which was fine but not as good as a normal Indian buffet. The buffet costs £14 on weekdays. The curries were lamb sag, aloo sag, a chicken one and some daal. Drinks are extra — my non alcoholic cocktail was a mixture of carton fruit juices and was £3.95. They have a salad bar and cakes.

We found it very hard to pay and ended up paying one by one at the bar.