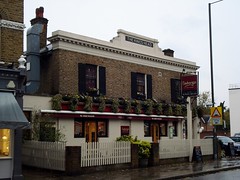 The Kings Head was a pub in Teddington. It closed in early 2010 as the owners, Innventive Operations, went into administration; there's more information on the Teddington Town website.

As of September 2010, the premises are occupied by a branch of Raymond Blanc's White Brasserie company; see also the Teddington Town report.

The information below is retained for people who want to know what it used to be like in its previous incarnation.

Pub in Teddington. It has a restaurant (L'Auberge) at the front, with the pub part in the back. There's also a beer garden, accessed via the pub part.

Kake visited on a Saturday afternoon in November 2008. Beers available were Harveys Sussex Best, Doom Bar, Greene King IPA, Twickenham Autumn Blaze (£1.60/half), and St Austell Tribute. (The 2009 Good Beer Guide notes that one of the guests is usually from the local Twickenham brewery.)

According to the 2009 Good Beer Guide, the style of this place is "somewhere between a hotel lounge and a gentlemen's club, with several leather sofas" - this is a fairly accurate assessment, though it should be noted that there's also a flatscreen, which on my visit was showing rubgy with the sound on (no competing piped music, though).

There were quite a lot of people in when I arrived a little after 3pm, though there were still free tables. The restaurant at the front was booked out to a private function.

Accessibility: One step up to get in. It's on one level once you're in, but the ladies' toilets are extremely cramped.