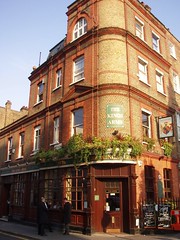 The Kings Arms was a pub just behind Grays Inn Road, not too far from Chancery Lane Station. It has now closed. As of October 2011 the premises were occupied by a gastropub called The Lady Ottoline, but this has now closed in its turn.

The information below is retained for people who want to know what it was like as the Kings Arms.

A pub just behind Grays Inn Road, not too far from Chancery Lane Station.

Not surprisingly, this place gets busy after work on most weeknights. It's an attractive place, but not very large — there are four or five tables downstairs, as well as a small room upstairs (seating about 25) and a larger games room with two pool tables. However, it has a good range of drinks and an open fire to keep the place cosy in winter. On Ewan's December 2008 visit, the downstairs was packed with no available tables, but the small upstairs room was empty.

There are four handpulls for ale, with London Pride (£2.95/pint), Greene King IPA and Timothy Taylor Landlord, as well as one off on Ewan's visit. Over the course of the evening, the Landlord also ran out, but the Pride was fine.