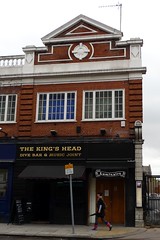 Now closed; was a self-proclaimed "dive bar and music joint" underneath the Luminaire music venue (owned and run by the same people), in Kilburn.

A self-proclaimed "dive bar and music joint" underneath the Luminaire music venue (owned and run by the same people), in Kilburn, not too far from Brondesbury Station. According to an announcement in November 2010, both the Luminaire and the King's Head are set to close on 31 December 2010.

From outside, it looks pretty intimidating, with little light getting through the darkened and shuttered windows. Inside, the space itself is fairly atmospheric (not dodgy at all) and quite small, comprising the bar and about three leather banquette booths, with some other seating near the front, and a few high stools along the back wall. It has the same kind of dive bar atmosphere as Slim Jim's Liquor Store on Upper St.

Decor heavily stresses an Americana theme, including a jukebox, rock artwork and several (well-antlered) animal heads mounted on the wall, though the mirrors behind the bar make clear the bar's Irish predecessors (it used to be called McGovern's, and later was known as The Kilburn) in an area once known for its Irish immigrant population.

The beer selection is a little disappointing (there's no ale, though they usually have a few bottles of ale in the fridge, which have been either Deuchars IPA or Brains SA on Ewan's visits, and have sometimes run out during the evening), though there is Amstel and Guinness on draught along with a few other basics. They also have bottled Sierra Nevada pale ale (£3.90/bottle). House wine is perfectly drinkable, and they have a wine list which splits all their wines into three price categories ("cheap", "decent" and "good").

On the nights Ewan has visited, there's been a pub quiz (mostly music-based), which is held on the last Wednesday of every month (starting 8pm, £1 per person, maximum six per team, cash prize). The place can get busy pretty quickly, but it often depends on the popularity of the gig upstairs, and most times seats have been available.

There's no food available, only crisps (though if you ask nicely they may turn a blind eye to food consumption provided it's not messy or smelly).