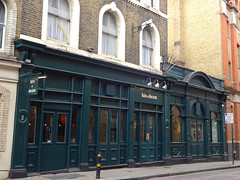 Thai restaurant near London Bridge Station. It was previously a pub called Suchard Freehouse, run by the owner of Suchard Thai on Tooley Street. The current restaurant, Kin + Deum, is run by the previous incumbent's children.

It looks completely different from its time as Suchard's Freehouse, with clean, bright, uncluttered decor. The walls are painted in soft shades of grey and white, and pale wood boards are underfoot. The lighting is primarily natural, supplemented by directed spotlighting as the evening draws on.

There are two dining rooms, separated by a tall archway. To the left, there's a communal table in the centre with bar and counter seating around the edges, while to the right, bentwood chairs are lined up neatly at square wood-topped tables.

Kake and bob visited on a Thursday evening in June 2019. When we arrived at 6pm there were already several people in, and we were glad we'd booked since it got busier very quickly. Music was playing, not too loud, but there was a fair bit of conversational noise echoing around the hard surfaces of the room, and it got increasingly hard to hear each other as the place filled up.

Shiitake spring rolls (£5.90) photo sounded (and smelled) good, but were a little lacking in seasoning. Siam's aubergine (£5.90) photo was perhaps the most disappointing dish of the evening, with over-soft aubergine inside a thick, greasy batter.

Som tum (£7) photo was OK, but very subdued in flavour, with only very subtle hints of either fish sauce or chilli. Claypot prawns with glass noodles (£12) photo were better; nicely-textured noodles suffused with plenty of prawn flavour, topped off with four large competently-cooked shell-on king prawns.

Tamarind crispy eggs (£5) photo were fine, though not as exciting as we'd hoped, with more sweetness in the sauce than ideal. Jasmine rice (£2/person) was also fine, and generous portions for the price.

Kake's verdict: I really wanted to like it here, but I didn't think the food was good enough to make up for the noisy and crowded environment.

Accessibility: A large step to get in. No additional steps to the toilets. The tables are quite close together.