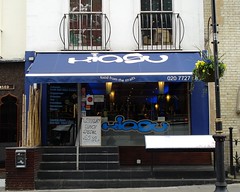 Kiasu was a Malaysian/Singaporean restaurant in Bayswater. It closed some time around the end of 2010/beginning of 2011.

Mr Noodles reports that as of January 2011 the premises were occupied by a pan-Asian buffet restaurant. As of November 2011 the occupant was Dim Sum Diner, "an American-style diner that serves dim sum, classic Oriental dishes and a few diner favourites". Dim Sum Diner closed in its turn, and as of March 2012 gourmet traveller reports that a Mediterranean restaurant called Manoush is due to open in its place.

The information below is retained for people who want to know what it used to be like as Kiasu.

Malaysian/Singaporean restaurant in Bayswater. They also do a few Thai and Vietnamese dishes.

The decor is fairly cafe-style, but not scruffy. Although the ambience is a bit "in, eat, out", the service is still decent; efficient rather than dismissive.

Kake, Ewan, and Sebastian visited late on a Tuesday evening in September 2009. It was full when we arrived, but a staff member assured us we'd only have to wait a couple of minutes, and we were soon seated.

To start, we shared roti pratha (curry with buttery flatbread, £4.50) photo and tauhu goreng (deep-fried tofu with cucumber, beansprouts, and peanut sauce, £4.50) photo; both were good. The roti was hot, flaky, and rich without being heavy, and its accompanying curry was flavourful. The tofu was crisp on the outside, soft on the inside, and perfectly complemented by the peanut sauce.

We ordered individually for our mains. Kake's Penang char kway teow (£6.90) photo was fine, not too greasy, though some of the noodles were stuck together more than perhaps optimal. However, the prawns were nice and big and not overcooked (though there were only three of them), slices of Chinese dried sausage were evident, and there was no attempt to bulk the dish out with a vast quantity of sliced fishcake (instead, just a couple of welcome enough slices). Little crispy lardons gave a nice texture contrast. Given options of mild, medium, or hot spicing, I chose medium, which to my palate was just gently warming. The portion was more than I could eat, but they were happy to pack up the leftovers for me to take home. Ewan had a vegetarian mee goreng (£7.20) photo, a tasty and simple noodle dish done very well.