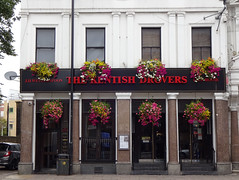 secretlondon visited in June 2008. It was quiet and a bit soulless, but felt safer than a lot of pubs in Peckham.

Kake visited on a Monday afternoon in October 2008. I got here a little before 3pm, and I actually had to hunt around for a free table; although it's not that small, there were lots of people in. Some of the tables are those high table/high stool combination things. There's not much natural light inside. I ended up sitting in one of the little booth-like things (not actual booths, but back-to-back transverse bench seating with high backs) hidden behind a couple of pillars to the side of the entrance. No piped music, plenty of loud and cheerful conversation though.

The bar has lots of handpumps, but the only real ales available were Abbot Ale and Ventnor Oyster Stout, with Bombardier coming soon. I tried the Oyster Stout (£1/half) - it tasted possibly a bit sour so I took it back to the bar to check; a chap who may have been the head barman or manager tasted it (a fresh pull from the pump) and said he thought it was meant to be like that (and having consulted bob later, he was probably right) but that he'd happily swap it if I didn't like it. The only choice for my swap was Abbot, but it was fine. Very friendly interaction even though he was clearly fairly busy; gold star for customer service.

They offer free wireless internet via The Cloud - it worked fine on Opera on my phone.

Accessibility: Three steps up to get in, but there's an accessible toilet indicated inside so maybe there's a portable ramp or another entrance... not sure.