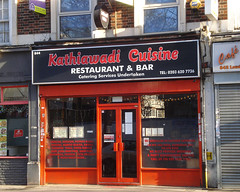 Kathiawadi Cuisine was a Gujarati cafe/restaurant in Thornton Heath, specialising in food from the Kathiawad peninsula. It has now closed. As of August 2017 the frontage suggests it's either been or will soon be replaced by a Indian and Lebanese restaurant called Chaska House photo.

Gujarati cafe/restaurant in Thornton Heath, specialising in food from the Kathiawad peninsula. It's completely vegetarian, and most of the dishes on the menu can be made vegan on request.

Inside are seats for around 20 people on tall-backed black pleather chairs at tables covered with white linen cloths. A service counter with a glass-fronted display of sweets is along one wall, with shelves of packaged savouries behind. Mirrors and pictures of village life in India cover the wall opposite.

Kake visited on a Wednesday morning in February 2017. There was only one other customer when I arrived around 11am, but three others turned up during my visit. No music was playing. The staff were working out the back when I got there, but the other customer advised me to press the bell by the till for service, and they came out promptly to take my order.

I ordered pani puri (£3.50 for ten) photo, and they checked that I wanted tamarind sauce and onions. The shells were almost all structurally sound — only one of them leaked — but two or three were a little stale. They were filled with onions, chickpeas, and mashed potato, and a couple of them were too full to actually get much pani in. The pani was nicely spicy, but I'd have preferred a bit more herb flavour.

Service was friendly and helpful, and a glass of water was brought with my food without me having to ask.

Accessibility: A small step and a heavy, narrow door to get in. Toilets not checked.