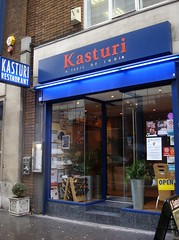 Kasturi was an Indian restaurant on Aldgate High Street. According to their website, they moved to Charlton in 2012. A restaurant called Dawat is in their old location.