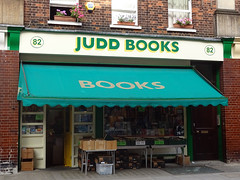 Bookshop on Marchmont Street in Bloomsbury. They advertise themselves as "two floors of used and bargain books on the arts and social sciences", and their website lists literature, art, film, media, architecture, music, history, philosophy, psychology, economics, politics, and international relations as being among the subjects covered. According to comments on Kudocities, they have a good London section too.

Kake visited in September 2008 and had a good trawl through the bargain boxes out the front (all titles under £2 each, or three for £4.50). These contained both fiction and non-fiction, and I quickly found something worth reading - Kate Clanchy's What Is She Doing Here?, the story of a Kosovan refugee who ended up living in London. I was amused to note that the non-fiction boxes included a copy of the 2007 Good Beer Guide (this was the day before the official release of the 2009 Guide).

I didn't get a chance to look through the stock in the actual shop, as I was running a little late.