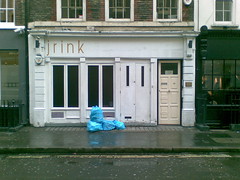 A cocktail bar in Soho, which was renamed Nighthawks in 2010 and closed some time later that year.

Fairly standard bar in Soho - however when [Juliette]? and friends went there on a weekday evening, the staff were so helpful that it deserves a mention! They couldn't do food for some reason, so let us go out and get takeaways and gave us plates and cutlery to eat them when we returned.They also went out of their way to rearrange tables and chairs for us.