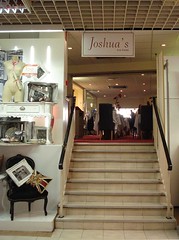 Joshua's Tea Room was a small café on the first floor of Allders in Croydon. It opened in early 2012, and closed along with the rest of Allders in September 2012.

Small café on the first floor of Allders in Croydon. It opened in early 2012.

This is quite a nice little space for a department store café; the recessed spotlights give a much lower light level than the fluorescent tubes of the rest of the store, and its tucked-away location means that the canned music playing in the store is also blocked out. The dark burgundy carpet is hard-wearing rather than ornate, but the tables are topped with linen tablecloths protected with circles of glass. There are no menus on the tables, but cakes and scones are displayed under clear covers in the centre of the room.

Kake visited on a Friday morning in March 2012. There were five other customers when I arrived around 11am; I got the impression that at least a couple of them were Allders employees on their tea break. Despite the brisk early-spring weather outside, it was quite warm in the café space and there were a couple of fans going to counter this.

I went for a cream tea (£3.45), which consisted of a scone with jam and cream photo and a pot of tea. The teas on offer were assam, earl grey, darjeeling, and their own house blend; I asked for soya milk but they didn't have any. The house blend tea was fine, though came as a teabag so I wasn't really sure what made it a "house tea". The scone has large, plump raisins in and was a good size — neither too small to be satisfying nor too large to be properly baked — and served slightly warm which gave it a good texture. Strawberry jam (Frank Cooper's) was undistinguished, but the clotted cream was fine, and a generous portion.

Accessibility: Although there's step-free access to the shop floor, the café is up several steps from there, with a handrail on both sides.