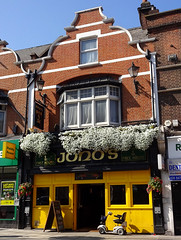 Pub in Ilford, in the Good Beer Guide.

Entry is into a section with exposed brickwork and church pew style seating. The bar is a little further back, opposite a couple of booths with stained-glass dividers, and beyond this is a rather odd space that seems to be themed around a traditional thatched cottage, with faux-stone walls, a large open fireplace at one end, a wooden sideboard with a few pots on it, a few square mirrors with wooden window frames fixed over them, and a fringe of thatch all the way around the ceiling. There's a covered smoking area out the back with a couple of standing tables.

Kake visited on a Friday morning in September 2017. There were three or four other customers in when I arrived around 11:15am, at least some of them seeming to be regulars. No music was playing at first, but a couple of the customers were carrying on a lively conversation with the bar staff, and one of them put a few songs on the jukebox a bit later (this was slightly louder than ideal for conversation).

The two handpumps on the bar were clipped for St Austell Tribute and Castle Rock Harvest Pale. A pint of lime and soda was £1.30.

According to a sign seen in September 2017, quiz night is Thursday.

Accessibility: No steps to get in, and most of the seating is on the level (some is up a small step). It's step-free to the gents' toilet and one marked as accessible (the ladies' is down a flight of stairs).