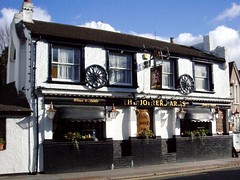 The interior of the pub photo presents a darkened world of antique armour, plates, pots, clocks and assorted bric a brac. A lot of care has been taken with the decoration and it really adds ambience. They do project sport onto a large screen, though the sound isn't turned up too loud. The ceiling is relatively low, but John is 6'2" and didn't have to duck.

On our visit late afternoon on a public holiday in March 2008, the place had only a smattering of customers and we were easily able to find some large enough tables in the corner of the pub.

London Pride (£2.46/pint) and Old Speckled Hen were available on tap, as well as the usual range of lagers, for reasonable prices. They did have an awful lot of trouble getting both the Pride and the Hen out of the pumps, though; there was a lot of foam, and pouring back and forth between glasses, involved. The beers were fine when we finally did get to drink them, though the Pride at least was served significantly colder than Kake has ever had it before.

In Feb 2012, there were three real ales on tap: Woodforde's Wherry, London Pride, and Sharp's Doom Bar. They didn't have Coke/Pepsi on tap, only in bottles (not sure about other soft drinks). Between 20:00 and 22:00 on a Wednesday evening, the pub was fairly quiet, so we had no trouble finding seats/tables for a group of 15-20. They often have karaoke on Wednesdays (starting at about 22:00), but this may not be every week; once that starts, the music is so loud that it's very difficult to hear the people sitting next to you.

There's a large beer garden out the back as well, which we didn't explore due to inclement weather.

No evidence of cooked food, but they had crisps/nuts on sale.