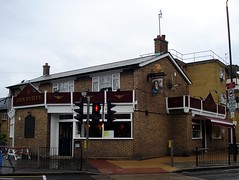 The John Evelyn was a locals' pub in Deptford. It closed in September 2010, and as the Deptford Dame reports, the Paddy Power bookmakers chain were granted a gaming licence for the premises. As of February 2011, the premises are indeed occupied by a branch of Paddy Power photo.

Locals' pub in Deptford. The writer John Evelyn himself lived in Deptford for a good deal of his life, and presumably both the pub and the street it's on are named after him. It underwent a change of management in December 2009; landlord Doug (who featured in BBC2's The Tower documentary) is no longer at the helm.

The pub is split into two sides, though there's no door between. The right-hand side seems to correspond more to a public bar. On a September 2008 visit, Kake noted that there was a dartboard in there, though we're not sure if this is still the case after the change of management. As of March 2010 it has a pool table.

The bar has four handpumps, two in each side of the pub, though on our visits so far only one or two of them at most have been on (and sometimes none). In September 2008, Shepherd Neame Masterbrew was £2/pint (cheaper than the lemonade and lime, at £2.30/pint), while in March 2010, Courage Best was £1.15/half.

On Kake's September 2008 visit, prior to the management change, there were quite a few locals in on a Tuesday afternoon, and everyone seemed to know each other. People were wandering in and out for a chat all the time I was there. The atmosphere was very friendly, and I didn't feel at all unwelcome.

On a return visit in March 2010, again on a Tuesday afternoon, the atmosphere was a little different; the sofa had been removed (to make room for the live music and karaoke, according to a member of staff), and loud music was playing on speakers, possibly a jukebox set to random, as the selection lurched from reggae to thrash metal to boyband ballads. Flyers on the tables advertised live jazz every Monday between 2pm and 5pm.

They used to do food, but we're not sure if they still do.

Accessibility: There are three entrances; two of them have a step up to get in, but there's level access via the one round the side. It's all on one level once you're in.