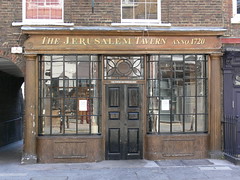 A very small pub in Clerkenwell, run by the St Peter's Brewery. It is situated in a converted shop, and was in fact not opened as a pub until the mid-1990s.

It gets very busy and crowded with after-work drinkers; you really need to be there by around 5pm or even earlier if you want to get a seat. There are a couple of tables outside, but they also fill up early. The street it's on is a quiet one, so drinkers spill out onto the pavement and even across the road. Once the place is full, the staff will ask you if you're drinking inside or outside; if you're drinking outside then you get your pint in plastic rather than glass. Tables can be booked if you aim to turn up at 6pm (or earlier; we booked one from 5pm on a Friday).

They usually have four or five of the St Peter's beers on tap (served under pressure through fake "cask ends" behind the bar, and sometimes including their Mild) and all the rest in bottles. They also have Aspall's cider on tap (£3.10/pint as of July 2007) and a few guest beers.

As of July 2007, it does food until 9:30pm, but not every day - Kake thinks Tuesdays, Wednesdays, Thursdays, not sure about Mondays, and definitely not on Fridays. (bob points out that the food times have changed at least three times in the past year, so it's a good idea to check in advance if you need to be certain.) Beer In The Evening comments suggest that the food is rather expensive. Snack-wise, they have a good selection of Salty Dog crisps, nuts, Soffle's pitta chips, and Serious Pig snacking salami.

The bar staff do a great job of serving people as quickly as they can, but are hampered by the fact that there's only one till, which seems to be a major bottleneck.

Accessibility: It's on one level apart from the toilets, which are down a narrow staircase just past the bar, and one table which is up a few steps on a mezzanine-type thing. It's very narrow right by the bar (even if there isn't a queue for the bar, there's a pillar in an inconvenient spot), restricting access to not only the bar but also the toilets and the tables at the back of the pub.

Note that it's closed at weekends.