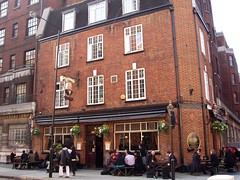 The Jeremy Bentham was a student (and ale) friendly pub near UCL in Bloomsbury, named after a key figure in the University's history. It has now closed. According to the June/July 2017 London Drinker, the premises were taken over by the Simmons chain of bars.

A student (and ale) friendly pub near UCL in Bloomsbury, named after a key figure in the University's history, the philosopher Jeremy Bentham, a wax bust of whom is on display.

There's a bit of seating downstairs in the busy bar area, and another quieter room upstairs which occasionally has space available, but this pub is often thronged after work (and after school), as it is very convenient to University College London (UCL) and the hospital nearby Euston Square Station. The benches around the pub outside are particularly popular.

Inside, the pub shows its ale-friendliness by a good selection of rotating guest ales. There are five handpulls, and on an April 2009 visit, apart from Abbot Ale and Old Rosie scrumpy, there was Jennings' Golden Host and Exmoor Hound Dog (in particularly fine form, and our large group saw that off fairly quickly), and Brain's Rev James and another guest on a November 2009 visit.

Despite getting busy, this is a dependable pub and not a bad place at all for a drink, provided you can find somewhere to sip it.