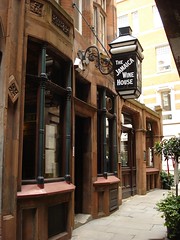 Pub near Bank Station in the City. It's also known as the Jampot. It was bought by Shepherd Neame in early 2009.

The interior is all bare floorboards and dark wood, and is divided into several separate compartments around the edges, with a more open standing space around the bar. Each compartment has wooden benches built into its walls, as well as several small square tables which are at the right height for those sitting on the benches but peculiarly at exactly the same height as the tall stools which provide the rest of the seating - indeed, the major difference between the tables and the stools is that the latter have additional crossbars to rest your feet on.

Food is served all day until 8pm (according to the staff member I asked; though she warned me that Mon-Wed they may stop early). A sign I saw in the window mentioned that the menu changes roughly every four weeks. See photo of the menu as of September 2008.

I had the roast chicken terrine (starter, £4.50), which came in a generous portion with plenty of sliced toasted ciabatta. It was pretty good. They'd even bothered to dress the couple of salad leaves it was served on, with a decent enough wholegrain mustard vinaigrette.

Accessibility: There's a step up to get in at at least one of the entrances, and the toilets are down a flight of stairs.