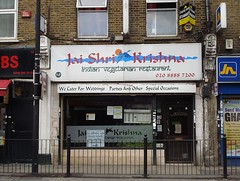 Note: According to Harringay Online, there was a fire in Jai Shri Krishna in May 2019. It's unclear what this means for the future of the restaurant.

It seats around 60 in a casual but pleasant environment, with tall-backed black pleather chairs and recessed spotlights in the ceiling. They don't serve alcohol but are happy for you to bring your own; no corkage was charged on our visit.

They have an unusual ordering system, where you're given a pad of paper and a pen to write down what you want from the menu (on our visit this system wasn't actually explained; we were left to figure it out on our own).

Kake, Bec, Ewan, and Katie visited on a Tuesday evening in August 2013. There were only a few other customers when we arrived around 7pm, but it filled up rapidly during our visit. No music was playing, and there was plenty of lively conversation.

Pani puri (chickpeas and mint water in crispy shells; £2.50) photo were good; the puri had plenty of structural integrity but were still crisp to the bite, and the pani had plenty of flavour. Mogo chips (deep-fried cassava; £2) photo came in a generous portion.

Sabji bahar (potatoes with spinach and fenugreek leaves; £3.55) photo had plenty of fenugreek flavour, and the potatoes were fried to a beautiful sweetness.

Pilau rice (£2) had that wonder of wonders — peas that weren't overcooked, bursting with freshness. Brown rice with vegetables (£3) photo also got our seal of approval, and not just because we were pleased to see a brown rice dish in a restaurant.

Our final bill photo for plenty of food came to an astonishingly cheap £6.55/head.

Kake's verdict: For the price, the quality was very good. I would definitely come back if I was anywhere near the area.

Accessibility: No step to get in, but there is a step to the toilets, and there are tight turns both on entry and when getting to the toilets.