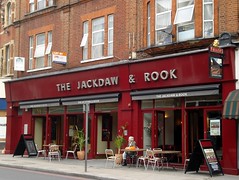 The Jackdaw & Rook was a Fuller's pub on Balham High Road, but it closed some time around the end of 2010/start of 2011. As of October 2011, the premises are occupied by Gazette Brasserie, which was previously situated nearby on Ramsden Road.

The dark red of the exterior is carried through inside, where cream walls are set off by dark red and dark green paint. The floor is hardwood, and some if not all of the tables are unvarnished in that gastro-trendy way. There are also signs of unintentional wear to go with the intentional ones; chipped and marked paintwork, and blu-tack residue on the walls. Plate-glass windows and patio-style doors at the front let in the light (and the dubiously-fresh air of Balham High Road, when the weather is good enough for them to be opened up). There are plentiful sofas at front and back, and two pool tables out the back near the loos.

On DrHyde's, Ewan's, and Kake's various visits, weekday afternoons and evenings have generally proved fairly quiet (except when the live music is on, starting around 9pm), though weekend evenings are far busier and the feel is more like a sports bar.

As of June 2009, the only real ale available is London Pride; Kake was told that they'd tried stocking Discovery too, but found they couldn't sell enough of it to keep it in good condition, and that they'd rather not sell it if they couldn't guarantee its quality. The Pride that DrHyde tried in March 2008 was well-kept, providing further evidence that they do actually care about the beer here. However, on the same visit, the soft drinks selection was a bit poor, with no grapefruit juice, and they tended to put too much ice into soft drinks. In June 2009, Kake's half of Honeydew (not a real ale) was £1.70.

Food is served noon-9pm, but beware that on quiet evenings the kitchen may close early. The pizzas DrHyde and friends ordered in March 2008 were good.

A sign on the bar (June 2009) advertised free wireless, with the access code being available on request. Another sign advertised live music every week; DrHyde, who experienced this in September 2008, found it not to be good, and more like someone wailing off-key to random guitar strumming than actual music.

DrHyde's verdict: This isn't a great pub, certainly not one worth travelling to, and the nearby bbc bar is much better.

Accessibility: No steps to get in, step-free throughout, and there's a RADAR-locked accessible toilet.