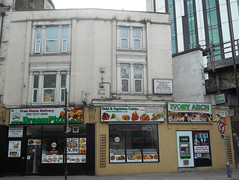 Restaurant on Walworth Road, near the Elephant and Castle roundabout. They've been in operation since 1986, and the interweb says they were the first ever curry delivery service in the UK. They do takeaway and delivery, and you can order online from Hungry House.

Kake and bob tried the takeaway service on a Saturday night in March 2009, ordering via Hungry House. The food arrived in just over an hour.

Meat samosas (£2 for two) had well-flavoured filling and decent pastry but had clearly been fried in not-hot-enough oil, as they were very greasy. Tandoori chicken (£3 for a starter portion) was salty and a little dry.

Rani makhani (aubergines and selected vegetables cooked in a makhani sauce, £5.50) was bright red, sweet, coconutty, not overly endowed with aubergine, and not particularly interesting. Kake wouldn't order this again. Kas kolla (green banana cooked with onion, pepper, mixed spices, and fenugreek, £4.50) was a little better, if only because the green banana was an actual feature of the dish, though the spicing was still fairly indistinct. Saag bhaji (£2.50 for a side dish portion) was fine.

Fans of spicy food may be interested to learn about the wrath of khan (£5.85) - described on the menu as "lamb cooked with onions and ghee in an extremely hot sauce with very hot chillies - a very extremely hot dish", this was actually hot enough for bob to get an endorphin rush.

A commenter called Ed (April 2009) reports having eaten from here "many times" and says that although there have been times when the food has been late, they've always included a free side dish to make up for it.