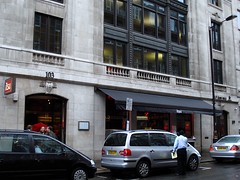 Now closed; was an Itsu branch on Wardour Street in Soho.

Kake, Bec, Ewan, Ruudboy, and Kat visited on a Friday lunchtime in September 2007. We perhaps didn't see the place at its best, since the conveyor belt had broken down and so the staff were having to take orders and bring people things from elsewhere on the belt. However, we were rather unimpressed by the service. Granted, the staff were having to do more than they usually would, but a number of them really seemed to begrudge this. None of them were actively rude, but it was always simmering under the surface.

The food was fine, though, and the miso soup was very good. It's worth noting that their spicy dumplings are vegetarian; this isn't indicated on the menu, but we asked. We had two vegetarians in our party, and both were happy with the selection available to them.

The menu on the website looks somewhat different to the menu we saw on our visit. They offer a few cocktails, and also a couple of interesting-looking nonalcoholic cocktails/juice combinations.