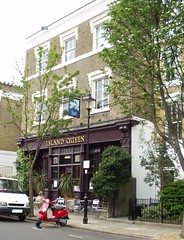 A Castle Mitchells & Butlers pub on some quiet back streets in Islington, just east of Upper Street not too far from the canal.

It offers Belgian beers and wheat beers as well as real ale (the London Pride was good on bob's June 2007 visit). There is also real cider on tap and in bottles. Service is definitely friendly.

bob's steak pie was tasty and did not commit heresy; the gravy was a bit thin though. On Ewan's November 2008 visit, he had a mushroom risotto (£8) photo, which was very tasty and not too creamy, just the right consistency, though the separate side salad (£2) was a rather disappointing mix of chopped iceberg lettuce, tomato, cucumber and red onion. Otherwise the menu offered a good variety, including roasts on a Sunday photo of menu.

There are quiz nights on Tuesdays, comedy on Thursdays. On a Tuesday lunchtime (in June 2007) there was no one else in the pub.