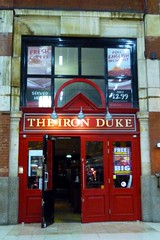 The Iron Duke was a fairly basic pub in Victoria Station. It has now closed and been replaced by The Beer House Victoria.

A pub serving Victoria Station, situated opposite platforms 1-7, with an outdoor entrance on Terminus Place.

This is as functional a pub as you can get, given that it serves the busy commuter crowd, opening much earlier in the morning than most London pubs.

There's not much atmosphere as such, but seating inside on a ground and mezzanine level, as well as having four sturdy wooden tables with matching chairs on the concourse side (with a good view of the departure boards), and a small amount of seating on the street-side pavement to cater to smokers. TV screens inside show sport with muted volume, but most people here are waiting for trains, either on their own or in small groups.

There are six handpulls at the bar, three on either side. London Pride and Young's ordinary are on both sets, with Bass (£1.65/half) and ESB (off on my June 2009 visit). Cooking lagers, as well as Grolsch and Grolsch Blond are also on draught.

Service is perfunctory as one might expect, and bar staff generally ask if you want any snacks with your drink. It may not be a drinking highlight, but it serves a valuable function.