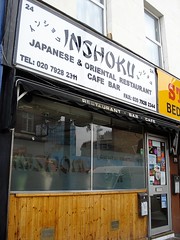 Inshoku was a Japanese restaurant on Lower Marsh, near Waterloo Station. It has now closed. As of January 2014 the Inshoku signage remains but the interior is entirely stripped out photo taken through window.

A Japanese restaurant on Lower Marsh, near Waterloo Station.

Note: According to a comment on the LondonSE1 forum, Inshoku may have closed, though we haven't yet confirmed this.

The restaurant can seat at least 50 people, and there was plenty of space when bob, Billy, and Anna visited on a Thursday evening in November 2008. Likewise, on Ewan's visit in February 2010, plenty of tables were available, though it was hardly empty.

bob had a large mixed sushi platter (£20.60) which included eight nigiri, eight pieces of sashimi, and eight pieces of California roll. It was okay; the fish was fresh enough, but the choice was quite dull. Notable by its absence on the menu was sea urchin. Billy and Anna had noodly things which they seemed happy enough with.

Ewan tried the sushi set B platter (around £10.50) photo, which had eight nigiri (three salmon, two mackerel, octopus, tuna and eel) and four maki, all of which was perfectly fine, especially the mackerel. We also shared some chicken kara age (around £3) photo which were crispy and tasty.

They do takeaway, and will deliver within a 1 mile radius.