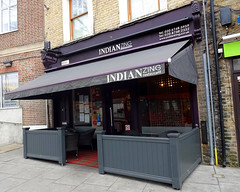 Kake, bob, and Matthew visited on a Wednesday evening in August 2009. It was fairly full when we arrived. We hadn't booked, and had a couple of large bits of luggage with us, so there was a small kerfuffle over where to fit us; they eventually put us in the tented-over garden bit out the back.

A complimentary musk melon and mint shot arrived shortly after we sat down, which was a nice touch and quite refreshing.

Matthew's malai tikka (£5.25) was flavourful and moist, and came with a tasty green coriander sauce for dipping. bob's calamari (£6.50) was very good, cooked just right (and bob is very fussy about his squid). Kake's mussel rasam (£6.50) was also very good, with just the right balance of hot, sweet, and sour in the rasam.

Mains and sides were equally good. Karwari fish (£9.50) was perfectly judged; although the fish used was a mild and delicate one, it wasn't at all overcooked. Tadka dal (£4.50) had a great smoky flavour, and baingan and makai bharta (aubergine/sweetcorn mash, £6) was mild yet flavourful, with a nice contrast of textures.

Service was friendly if a little oversolicitous; different waiters kept turning up every five minutes to ask us if everything was OK.

A commenter on this page tells us that in August 2009 they paid around £90 for two starters, three main courses, and three drinks, and thought the food was decent tasting but the sol kadi was a bit too sweet.

Kake's verdict: I very much want to go back. I want to go back several times. I want to order the mussel rasam again, and I also want to try every other fish/seafood dish on the menu. It almost makes me wish I still lived in Hammersmith.