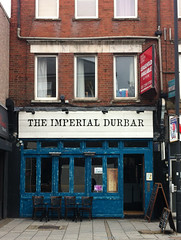 The Imperial Durbar was a cafe/bar in Tooting. It announced its forthcoming closure in July 2019, and the last day of trading was 18 July. As of early 2020 the premises are occupied by another bar called Taps and Tapas.

It's themed around colonial India in terms of both decor and drinks. At first glance the decor looks quite opulent, but on a closer look the ceiling mouldings are printed images, as is the attractive weathering on the wall tiles photo. It's also rather unevenly implemented, with white plastic toilet fittings providing an odd contrast to the ornate old-style toilet roll holders photo.

The bar specialises in triple gin-and-tonics made with a choice of around a dozen gins. They offer several tonic waters, mainly from Fever Tree, but also including one made in-house. These are perked up with house-made syrups infused with different herbs and spices.

Pastries are served at breakfast time. In the evenings (possibly also at other times) they offer Indian food delivered from Cardamom Club, a takeaway a few doors up. This is ordered via an old-fashioned telephone at the back of the bar, and must be paid for in cash on delivery.

Kake, DrHyde, and Tom visited on a Wednesday evening in October 2014. We were there to try out the gins, so we left the specifics to the bartender, who was very helpful in choosing us a good variety of combinations to suit our individual tastes. We had several of their triple gin-and-tonics, all costing around £11-12, and all good.

We also tried some of the food, which arrived in tiffin tins photo and was all pretty tasty.

Music was a little louder than ideal for conversation. A 10% service charge was auto-added to our drinks bill.

Accessibility: We failed to check whether there was a step to get in. Once you're in, it's step-free to the toilets and there's an accessible cubicle with a baby-change table.