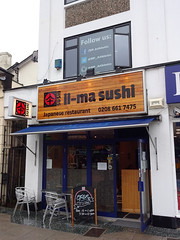 Japanese restaurant in Sutton. They also do takeaway but not delivery.

It's quite small inside, with just 18 seats. Framed Japanese art prints hang on the plain cream walls, and sake bottles and wooden boxes are arranged neatly on shelves high up near the ceiling photo. Simple but stylish wooden chairs echo the wood panelling of the sushi bar, and fairly convincing wood-effect tiles cover the floor.

Kake, Kat, and Ewan visited on a Wednesday early evening in August 2017. There was one other party in when we arrived shortly after their opening time of 5:30pm.

Everything we tried was good. Iima mori sashimi selection (£18) photo included two bonus slices of white tuna (escolar) as well as the three slices each of regular tuna, salmon, seabass, and yellowtail advertised on the menu.

White tuna also featured in the take sushi set (£12) photo, lightly torched to bring out its melting texture. The rice in this was very good, served still warm and moulded with a light touch, just enough to hold it together.

Kake visited again on a Thursday lunchtime in May 2018. I was the first customer when I arrived at their opening time of noon, but three others turned up soon after, and by 12:30pm it was about half full. Rather perky pop music was playing, not too loud.

I had the take sushi set again (£12) photo, since it was so good last time. The rice wasn't warm this time, but again well prepared, with each grain separate but still holding together just enough. The salmon was beautifully buttery, and had a much more interesting flavour than this fairly standard fish usually does. The sea bass also had a notably good texture, almost as rich as the salmon.

Miso soup was provided on the side at no charge, and refilled when I finished it. It was good, with a balanced savoury flavour, good-quality tofu cubes, and spring onion slices cut thin enough not to dominate.

No service charge was added to the bill.

Kake's verdict: I'd happily come back, and would recommend it as being worth at least a short journey.

Accessibility: No steps to get in (just a ridge at the threshold), and none to the toilet either, though access is a bit narrow.