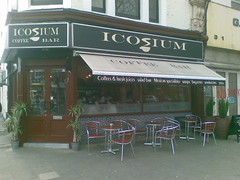 A Mexican cafe on Chiswick High Road that closed by 2012.

They can seat about 20 people inside and about 8 outside.

Has the typical lunchtime cafe staples of sandwiches, cakes and coffees. They also do a range of Mexican food for takeaway or eat in. Bob has had both. I had a beef burrito photo to take away in April 2008 which was slightly disappointing: not nearly enough chilli and the beef was probably under-seasoned. When I ate in June 2008, I had a beef fajita photo, which was made with beef mince instead of beef strips. It was okay at £3.95. The salsa was pretty hot. A slice of carrot cake at £1 was fine, if not a touch dry.