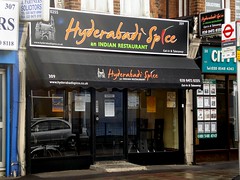 Small Indian restaurant on the High Street in East Ham. It's more restaurant-like and less cafe-like than many of the other eating places closer to East Ham Station. They also do takeaway and delivery.

In line with the name, they specialise in Hyderabadi food such as biryani, haleem (a slow-cooked dish of pounded lamb and lentils), and nihari (a slow-cooked lamb shank stew). Although the focus is on meat, they also have a few vegetarian options. They don't serve alcohol, and don't appear to offer BYOB either, but they do have a few non-alcoholic "mocktails". A sign in the window (May 2009) indicates that they're halal-certified.

Kake visited for an early dinner on a Monday evening in May 2009. When I got there a little after 5:30pm it was empty apart from a family of four just finishing their meal (perhaps in early for the "lunch" specials which run from noon to 5pm), but it started filling up shortly after and was quite busy by the time I left shortly before 6pm. Music was playing throughout my visit.

Since I was on my own, I chose an all-in-one dish, the jhinga biryani (£5.50, but see below) photo. This was very good; the rice grains were properly separate without being dry, the sauce layer was flavourful and generously-endowed with decent-sized prawns, and the crispy onion topping added good textural contrast. The heat level was quite sufficient for me; chilli-heads may prefer to add some of the spicy sauce that came with it, while others might resort to the (decent enough) raita that also came on the side.

Service was friendly enough. A slight oddness though was that my bill photo included 15% VAT on top of the menu prices. (This isn't the only one of the places along this part of the High Street that I've experienced this in.)

Child-friendliness: Four highchairs for children, but no baby change facilities.

Accessibility: Two steps to get in. No further steps to toilets, but access is quite tight.