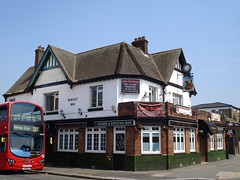 Pub/bar/restaurant on the edge of Hounslow.

Much of the space is set out as a restaurant, with tables set with tablecloths, napkins and so on, and a buffet station next to the bar. Along the side of the room is a bar area with small armchairs and sofas, leading back to a games area with pool table and fruit machine. A sign painted on the wall points the way to a patio garden. There are at least four flatscreens arranged around the room, including one in the restaurant area.

There are no handpumps on the bar, but a range of keg fonts which on Kake's July 2013 visit featured several lagers (Stella, Cobra, Kronenbourg, Carlsberg, Peroni, San Miguel) plus Guinness, London Pride, and Somersby cider. A glass of lime and soda (more than a half-pint, not quite a pint) was £1.80.

There was only one other customer during my Wednesday lunchtime visit, but then I was in quite early (just before noon). Music was playing, not too loud. The flatscreens were showing cricket with the sound off.

According to signs seen in July 2013, they do a buffet lunch between noon and 3pm on weekdays, and they have a "live English band" on Fridays and a live Indian Bollywood band on Sundays. As well as the restaurant food, they do some interesting-looking bar snacks including mogo chips and masala peanuts photo of bar snack menu as of July 2013.

Accessibility: No steps to get in. Stepfree to the bar, restaurant, seating area, games area, and toilets. The ladies' toilet at least has a sliding cubicle door, making it very easy to get into.