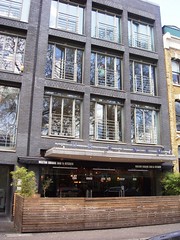 A bar on trendy Hoxton Square.

The place is built into a bare concrete basement, just slightly below road level and stretching back to the other side of the block, with a large glass window opening on to the street behind. It's not exactly pretty, but it means lots of space for tables, although it's fairly dark during the day. It fills up in the evenings, and is a popular local venue for live music. Bar service is friendly and given the absence of cash machines in the area, they will give cashback if you pay by card.

There's no real ale on tap, though there are some available in bottles (Sam Smith's, St Peter's organic ale, Bombardier, and a number of lagers). Draught lagers are Kirin (£3.40/pint), Red Stripe and Guinness (£3.30), Stowford Press cider (£3.80) and Paulaner Wheat Beer (£2.50/half). The house red wine isn't particularly great, though.

Live music takes place in a room just off to the side, with its own bar. There's a good range of acts who play, generally touring bands trying to crack the London live scene, so there's often a chance to catch up-and-coming bands playing. The space is large a square, with a raised stage at the front and seating around the edge.