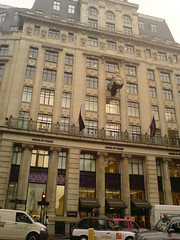 Small branch of the House of Fraser department store opposite Monument tube station.

When secretlondon visited in July 2008, there seemed to be four floors and no lifts, but according to an anonymous commenter (June 2012), there are five floors and two lifts.

Make-up is on the ground floor, and lingerie (including large sizes and measuring) is on the third. There is no food hall.