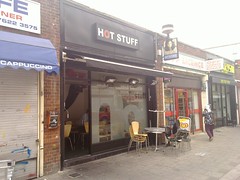 A well-loved local Indian with West African influences, on a parade of shops attached to the Wyvil Estate in South Lambeth, not too far south of Vauxhall Station.

There are about 25 seats, closely packed in, and it's clear at least from their website that this place doesn't need (or want) any more custom than it currently has. Thus booking is pretty much essential if you want to eat here. On the Monday evening in January 2009 that Ewan visited, the place was full, with dinner seatings at 7pm and 9pm, as they make clear when booking (and will remind you, not impolitely, though two hours is more than enough time).

(Note: as of early 2013, Hot Stuff has expanded its premises so getting in might be easier now than it used to be.)

It's a family-run place, so service is friendly and chatty. For our party of nine, they suggested starters and a main with naan, and asked if anyone had any special dietary requirements rather than present a menu (there are menus for smaller groups, it seems). They were happy to cope with the two vegetarians, and at least half of the food was vegetarian-friendly. You bring your own drinks, though (there are off licences nearby, or the huge Sainsbury's on Wandsworth Road).

Poppadoms and sauces were put down almost before everyone was seated, and there were plenty to go around. Starters included a garlic prawn dish, and another of chilli paneer, which was quite gorgeous and well recommended.

For the mains, a selection of dishes including chick peas, a daal makhani, and korma-style dishes was placed along the table. None of these was particularly disappointing, though the lack of a menu meant I can't recall just what was eaten. The naan was served on a huge tray, sliced into portions.

The final price was worked out as £12.50 each for our party of nine, which seemed more than fair for the amount and quality of the food. Reviews on the Internet suggest the price is fairly changeable, but it's never excessive.

The strength of the place is their versatility and friendliness, as well as the fresh cooking, setting it apart from most other local curry shops. They also offer takewaways for locals. Just don't expect to be seated if you turn up randomly.