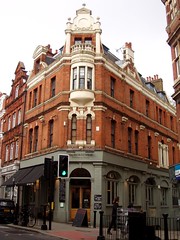 A modern craft beer-focused gastropub conversion of a former Wetherspoon's premises in Hampstead.

A number of new pubs in London have gained press for their focus on small beer producers (both ales and, increasingly, keg), and the Horseshoe has fit itself well into that company. They have brewed beer on site, but the brewery operations have expanded and moved out to Kentish Town as the Camden Town Brewery, which still feature heavily on the taps here.

There are three pumps for ale on the bar, which on Ewan's June 2011 visit featured Camden Town Camden Howe (a barleywine), Roosters Stars and Stripes, and Westons's traditional scrumpy. There are plenty of keg fonts, with other Camden Town beers (the Wheat beer, which was off on Ewan's visit, and two other rather more obscure ones, with ad hoc labels, including a nice Dunkel), two Brew Dog beers, Stiegl, and Thatcher's Gold cider.

The space itself is bright and airy, with long wooden tables in the front, and a raised area up some steps to the rear. Ewan has been past when the place was all set out for dining (perhaps just at lunchtimes), but on a Saturday late afternoon, the place was dominated by drinkers and the atmosphere was very pleasant. Music was playing, but not too loudly.