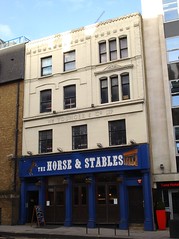 Pub/bar near Lambeth North Station, in the building previously occupied by The Horse. It also has "budget accommodation" available upstairs.

Inside, there's lots of dark wood and black-painted walls, but the ceiling is high and white, and there's a reasonable amount of light from the front windows, so in the daytime at least it doesn't feel at all oppressive.

A small banquetted alcove is tucked away near the entrance, back-to-back half-height booths line the wall opposite the door, and a couple of sofas sit right at the back by the staircase leading to the upper floor function room. The rest of the space is filled with upright chairs and tables.

There are four handpumps on the bar, two of which were clipped on our January 2014 visit — one for Bombardier and the other for Wainwright, though only the Bombardier was actually on. They also had keg taps for things including Rekorderlig flavoured cider, Symonds cider, and Samuel Adams Boston Lager. A pint of lime and soda was £1.20 in January 2014 but a rather hefty £2.50 in October 2015.

Kake first visited on a Monday lunchtime in January 2014. When I arrived around 1pm there were about half a dozen other people in, mostly also having lunch. Music was playing, relatively perky, but not sounding out of place and not overly loud given there were only a few conversations going on for it to compete with. Cutlery, paper napkins, and menus were already laid out on the tables.

In January 2014, Kake tried the grilled halloumi and roasted pepper sandwich (£7 including fries) photo, choosing the option of doorstep bread (rather than a bagel or baguette). Although the menu said they used white bread, on asking it turned out that they had brown bread too and were happy to use that instead. There was plenty of halloumi, the bread was good quality, and although the peppers weren't exactly roasted, retaining a fair bit of crunchiness, they were tasty enough.

According to a poster seen in October 2015, the pub is dog-friendly and if you come for Sunday lunch your dog eats free.

Accessibility: A step to get in. No further steps to the toilets. The function room is on one of the upper floors and we didn't spot a lift.