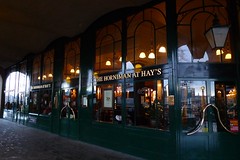 A large Nicholson's pub on the river in Hay's Galleria near London Bridge Station. It has quite a bit of outside seating overlooking the Thames and HMS Belfast.

It was very packed on bob's Friday evening visit in March 2007. When Kake visited on a Wednesday afternoon in June 2011, there were free tables inside, but none free on the riverside patio.

Due to the location, it's often filled with confused tourists. Service on Kake's June 2011 visit was hilariously slow even though there were more staff members behind the bar than people waiting in front of it to be served. There was no apology or explanation for the delay.

As of June 2011, food is served until 10pm every day, with breakfast starting from 10am.

Accessibility: At first glance, there are steps everywhere; but there's a step-free entrance via a ramp to the side of the pub. This gives access to the bar, some of the seating, and an accessible toilet. However, if you want to go from the bar to the riverside seating, you have to go round via this side entrance again.