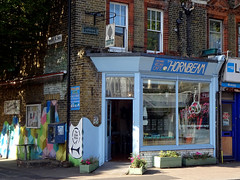 The community centre that houses the cafe was opened by local activists in 1992, and it's still partly volunteer-run. On Tuesdays and Wednesdays the kitchen operates on a "pay what you feel" basis, serving meals made with vegetables from the OrganicLea growers' co-op and surplus food donated by local businesses, while from Thursday to Sunday the food is provided by a series of pop-ups.

It's a fairly small space, but manages to have a cosy feel without being cramped. Warm brown tiles cover the floor, while the walls are painted white and decorated with left-wing political art and quotations here and there. Dried flower arrangements sit on the tables, and foliage cascades down the walls from pot plants on upper shelves. Mismatched wooden chairs and tables painted in a variety of colours provide seating for around 20 people.

Kake first visited on a Wednesday lunchtime in August 2010, in the company of a friend. When we arrived around 1pm, there were a couple of free tables, but these filled up during our visit. Service was a little haphazard, though this is possibly because we were there at the peak of lunchtime trade. My gado gado (£4.75) photo was quite tasty, consisting of cooked potato and cauliflower along with raw carrots, tomatoes, cucumbers, and leafy greens; the peanut dressing had a pleasing consistency too. My friend was a little less pleased with her polenta and mixed vegetable pie (£4.75 including three salads) photo, finding the choice of vegetables not entirely to her taste and some of the leaves in the green salad a little bitter, though she enjoyed the polenta, the accompanying new potatoes, and the tomato-cucumber salad.

When Kake visited again on a Thursday morning in September 2019, at 10:30am I was the only customer, and this remained the case throughout my visit. Rap music was playing, not too loud in most of the cafe, but with the speaker right next to the service counter so it was very hard to hear the person serving when I went up to pay. Iced tea (£2.50) was pretty good, brewed fresh then chilled down over ice, with a good balance of lemon, sugar, and tea.

There is free WiFi, with the password written on a small sign high on the wall in a corner by the toilet. They also sell refills of various household cleaning products photo of prices as of Sep 2019.