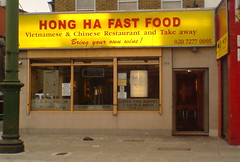 This was an average Chinese/Vietnamese takeway with an all-you-can-eat buffet during the day. As of mid-2009, it has had the shutters down for ages and a "For Let" sign has appeared on the top.

They also do takeaway and delivery, and you can order online at http://www.just-eat.co.uk/

Kake's overall opinion: inexpensive, good in parts (e.g. the Vietnamese pork spring rolls; not overly endowed with meat, but you don't miss it), disappointing in others (e.g. the crispy scallops; soggy batter, filling unidentifiable as scallop - or the satay tofu with lemongrass; overcooked, dry, completely lacking in flavour). They also completely forgot to include the noodles for the ho fun dish in our last order. Delivery is generally on time though, often even early.

Despite the "Vietnamese" tag, they don't offer pho, sadly.

The restaurant is noodle bar like in atmosphere and they do an all-you-can-eat buffet between noon and 7pm. secretlondon tried this in September 2008. It was £5 for a billed choice of twelve dishes, although one of the twelve was just a bowl of sweet and sour sauce and one was just fried rice. All the food had meat in with the exception of some seaweed and some stirfried vegetables. I think the spring rolls were also vegetarian but you would have to eat one to see. The food was fine but not recommended for vegetarians as there were no vegetarian mains. There was no background music and Chinese tea was available for 50p. They had a funny thing going on with the toilet; it had a sign on saying 'customer use only' and another saying 'out of order'. It was working fine though; the sign was presumably to stop people hassling the staff to use it.