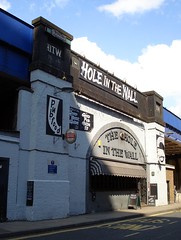 Real ale pub very close to Waterloo Station, hidden under the arches of a railway bridge.

The entrance to this apparently very small pub is off Mepham Street, hidden down behind the bus stops outside Waterloo. However, going through the small front room leads you into a much larger space behind, with a wooden floor, wooden chairs and tables, and even wooden banquettes. Trains rumble overhead. There's a beer garden of sorts out the back too (more of a smoking area). Sport is shown on flatscreens, the back bar has fruit machines and a Mediaeval Madness pinball machine, and the feel is very much that of a friendly locals' pub — despite its proximity to a major transport hub.

On our May 2008 visit the beers available were Hogs Back TEA, Sharp's Doom Bar, Young's Bitter, Greene King IPA, Abbot Ale, and Adnams Broadside. These were much the same in March 2011. In May 2013 the first three of these were still on, joined by Oxfordshire Ales Pride of Oxford, Sharp's Cornish Coaster, and Banks's Original, as well as Westons Bounds Scrumpy. A pint of lime and soda was £2.

Standard pub food is served (photos of menu as of May 2013: 1, 2). As of May 2008, the food times according to Time Out were noon-9pm Monday to Saturday and noon-4pm Sunday; we're not sure if this is still the case, though the 2013 Good Beer Guide does state that food is served all day.

In May 2013, Kake had the vegetable pasta bake (£5.65) photo, which turned out to be pasta with a tomato and vegetable sauce, not an actual pasta bake at all. It was fine despite this (I actually prefer pasta to pasta bake since I don't like loads of melted cheese in my food). The accompanying garlic bread was quite boring though, with little if any garlic flavour.

Child-friendliness: In May 2013 they were happy for our two nine-year-olds to come in for lunch. No obvious baby-changing facilities.

Accessibility: Four steps to get in (no handrail). Level access to (rather grotty) toilets once you're in, though the floor is uneven in places.

Getting here: The easiest way to get to the pub from the main concourse of Waterloo Station is to take the Station Approach exit, then head left.