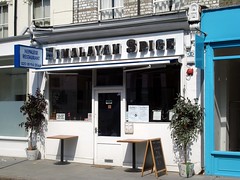 Now closed; was a Nepalese restaurant on Devonshire Road in Chiswick. As of mid-2011 the premises are occupied by an Indian restaurant called Indian Cinnamon.

A Nepalese restaurant on Devonshire Road in Chiswick.

On a Thursday lunchtime visit in May 2008, Bob was the only customer. I had the special menu of the day (£15). The dishes I had were quite tasty. (See Kake's photo of an example menu-of-the-day as of May 2008.)

They also do a cheaper "express lunch" for £8 and a takeaway "lunch box" for £4. Takeaway lunch is e.g. chicken curry with rice or nan bread; sag aloo and tarka dal with rice or nan; or special meat fried rice; and is only available between noon and 3pm. The eat-in "express lunch" is similar but includes additional dishes e.g. chicken bhuna, vegetable curry, and pilau rice or nan; or onion bhaji, matar panir, tarka dal, vegetable curry, and pilau rice or nan.

They also do takeaway which has a more extensive menu it would seem. It has the basic Indian curries as well as the Nepalese ones. (NB this paragraph was written by Bob and I'm not entirely sure how it relates to the other stuff I've added --Kake)