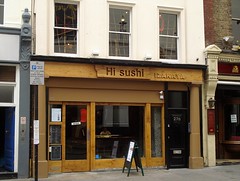 The dining space is on three levels; a few tables in the basement with the charcoal grill, a dozen spaces at the sushi bar along with a couple of tables on the ground floor, and more seating on the first floor.

Kake visited on a Friday lunchtime in March 2010. When I arrived a little before 2pm there were no other customers, though a few arrived during my visit. Slightly cheesy background music was competing with the noise of the water feature by the door, which wasn't an entirely pleasant effect.

I was only brought the a la carte menu to start with — they do have a lunch menu photo, but I had to ask for it. I went for the lunch set with tofu steak and vegetable tempura (£7.50 including rice, miso soup, green tea, and side dishes) photo. The steamed rice included in the lunch set was fine, not at all mushy. The salad was mostly undressed; the dressing was just dumped on top and was unpleasantly harshly vinegary. Miso soup was either absent or so lacking in miso (and indeed other ingredients) that I mistook it for tempura dipping sauce. The tempura was rather greasy and not crisp, so the only piece I really enjoyed was the lotus root, which has a good crunch of its own. The tofu steak was bland.

I also had a side order of hamachi sashimi (£7) photo; although this was very nicely presented, the hamachi was limp and waterlogged, and more acrid than I would have liked.

Accessibility: No step to get in; just a tiny ramp. Toilets are down a flight of stairs with a handrail on one side and no bends.